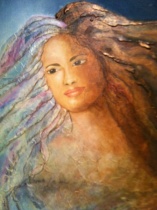 The turn of Eve’s head has always plagued me. What or who or how…

I don’t know about you, but I detest snakes! I mean a sincere, gut wrenching, nauseating, I could faint type of reaction. And I might add, there is not a mite of exaggeration here.

But that was not always the case.

Growing up, I lived on the edge of town, but then moved to the country. Both had their fair share of serpents. One day in particular has forever been embedded in my memory…

I was helping my Dad as he tilled the garden. My job at the young age of six was to pick up sticks, rocks, or anything that may hinder the ground being tilled.  The garden tiller had been humming steadily after lunch, but I soon noticed it had stopped it’s rumbling and I heard my Dad yell for me.

“Come here, I have something to show you”…

Are you beginning to see what’s coming?…

My Dad had taken the nearest object, a hoe, to do the deathly deed of removing the head of a pesky snake. What came next was to be expected from a dad. It’s what dad’s do…they teach their girls to be fearless and strong. No wimpy girls allowed.

My Dad held out the headless serpent for me to hold.

And I was  fearless as a kid.

I was more of a tomboy.

I climbed trees and gave bumps on the teeter totter in which I have a scar to prove. I played army and picked rocks out of my skinned knees. I climbed to the top of an evergreen tree when I was six.  I remember getting in quite a bit of trouble since it was a fifty foot tree. At the age of five, I was quite capable of gutting my Dad’s fish. I counted that as one of my favorite things to do.  I trampled through woods and creeks, caught frogs and explored empty barns to my heart’s content.

So, to take a headless serpent was just fine with me. No fear here.

As my Dad handed me the serpent, he said; “Do you feel his muscles still moving?”

Somewhere along the way, I lost my fearlessness and also contracted a hatred of snakes.

This is the reason why I have been plagued by the serpent of Genesis chapter three.

Because Eve was living a perfect, godly, and righteous life…how then, could she be deceived? How? Walking and conversing…face to face contact with the God that sits on the throne today…what in the world happened?

You would think such holiness would bring about discernment of the situation at hand. Didn’t she have an inkling, a gut feeling, or that female intuition that something of great magnitude was getting ready to take place…

You know the feeling; It’s that sick feeling you get in your gut when something is terribly wrong.

This was a “do or die” situation.

All because of a conversation with a snake.

But if this was really a snake, don’t you think her discernment would have been dead on? Don’t you think she would have waved him off, or at minimum, rebuked him for even attempting to engage her?

And what about God? Didn’t He, or couldn’t He had at least said, “Beware of the snake”?  “Watch out, there is s serpent that will be looking for you”. Give some sort of obvious direction here?

When studying this passage of scripture I found something:

The answer.  The answer to all my burning serpent questions.

In every picture depicting The Fall, we see Eve standing next to the Tree of Knowledge of Good and Evil, holding the apple, and the snake wrapped around this same tree…but when we read of this great disturbance, the serpent is not mentioned being wrapped around anything. Nor do we know it was an apple…but the final enlightening feature I found in this passage…

The definition of a serpent.

“a magician, one who whispers magic spells, one who prognosticates or tells the future, one who is arrayed in a coppery light”

“Masquerades as an angel of Light”

So, now does this incident make more sense? Does it bring the matter into a more human perspective? Do you see Eve as a mere woman like you and I?

How often are our own heads turned by things that are beautiful and shiny? How often do they captivate our attention? More times than not, we are deluded into thinking that those things beautiful, promise something beautiful.

How about how easily entangled we become in a not so holy conversation? What begins as something innocent ends up leaving a bad taste in our mouths.

How easily do we engage in debating the Word of God? Not preaching, debating, the kind that closes in on being argumentative and ends up defacing the Holy because it was full of pride.

I think there was more to Eve’s conversation with the serpent. I think there was a bit of debating that went on. The serpent stepped on her reality of God. He posed a theological question. “Did God really say”…

That same question is posed by thousands today; “Does your God really say…”

The question has not changed for thousands of years.

And neither has our response.

Should have God said to Eve; “Beware”?

No, He gave instruction. He expected to be obeyed.

God is more like a parent sometimes. That is why we call Him Father. He is full of parental advice.  He gives us commands and rules not for harm but for good. Our good. We may not know it, we may not feel it, but our faith should tell of it. Our mouths should testify to it.

God knew one day, He would return to the Garden. One day the flaming sword would be removed and all things restored.

One day, we will get to talk to Eve…we can ask about that serpent.

But for now, what about you?

Have you had any conversations lately? Has your head been turned by something beautiful? Have you given ear to untruth? Has your theology become soft so that you may be swayed?

None of us are immune to the enticement the serpent offers. And, when you find someone who has been seduced…try and understand, offer mercy, take their hand and take a walk with them. The walk that leads them back to the Tree of Life…